When you book with an account, you will be able to track your payment status, track the confirmation and you can also rate the tour after you finished the tour.
Sign Up
2588

Do not hesitate to give us a call. We are an expert team and we are happy to talk to you.

A handcrafted, luxury trip to Hwange National Park, home of Cecil the Lion’s pride, and to Victoria Falls, one of the great natural wonders of the world. Our journey will include meetings with conservationists, park rangers, anti-poaching units, and researchers; all highlighted by spectacular game drives to observe the incredibly wide variety of wildlife in the Park.

Hwange National Park is Zimbabwe’s biggest reserve, home to a profusion of wildlife, including giraffe, lion, zebra, and approximately 40,000 elephants. It provides sanctuary for all the country’s endangered species, including a population of wild dogs thought to be among the most sizeable surviving groups on the continent. Terrain ranges from desert dunes and savannah lands to rocky outcrops and sparse forests.

We will learn about and experience the Lion Research Program in Hwange and will also take in the Wild Dog (Painted Dog) preservation project and other activities undertaken in Hwange National Park to protect Zimbabwe’s precious wildlife. The Lion project is run under the auspices of the Wildlife Conservation Research Unit (WildCRU) of Oxford University’s Department of Zoology, which has grown to be one of the largest and most productive conservation research institutes in the world.

This trip of a lifetime has been handcrafted to provide exposure to the conservation efforts underway in Zimbabwe as well as view its amazing wildlife up close in their natural environment.  This is an exceptionally unique opportunity to get behind-the-scenes with on-the-ground conservationists, to experience and travel through Cecil’s territory, and hopefully, visit and photograph his pride. 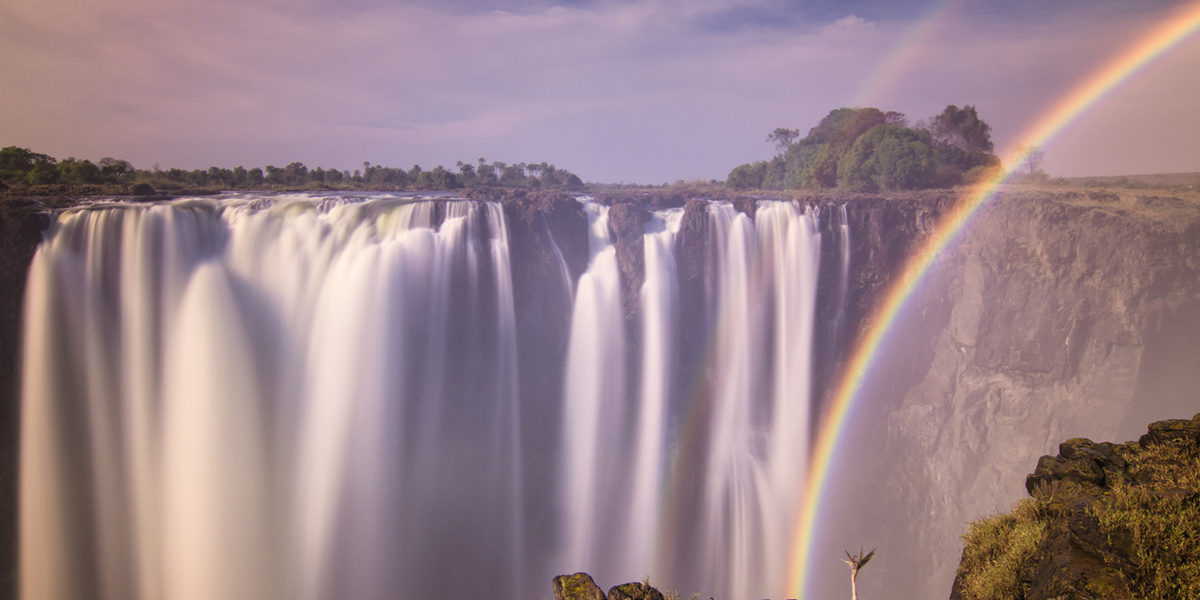 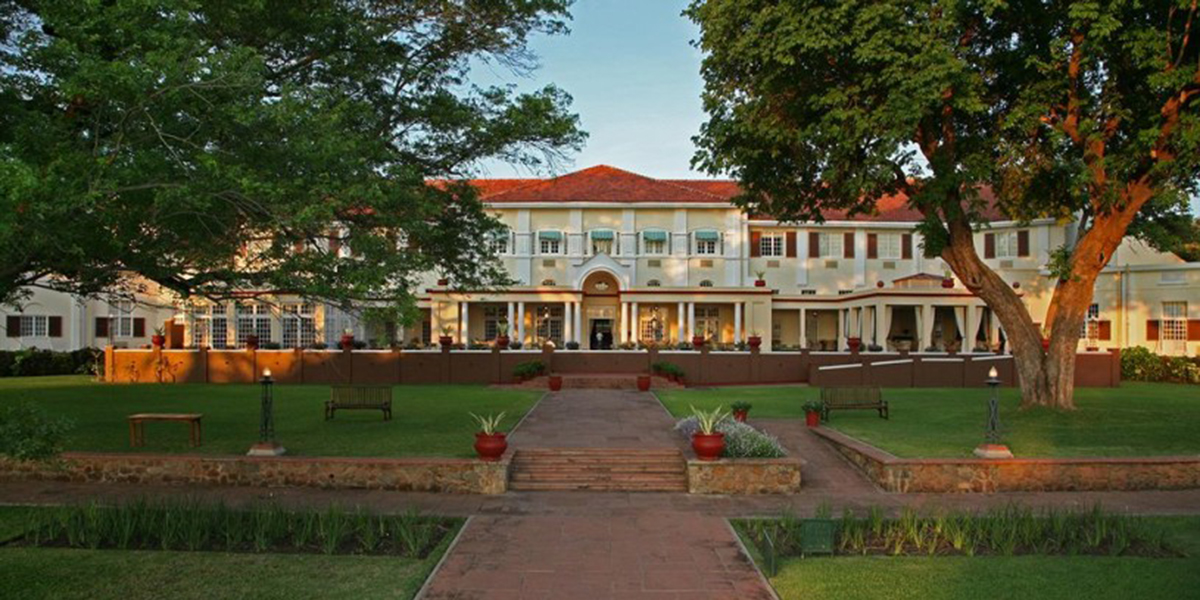 You’ll be staying at a luxury guest lodge, conveniently located within easy access to Victoria Falls National Park and the many activities to be enjoyed in the area. 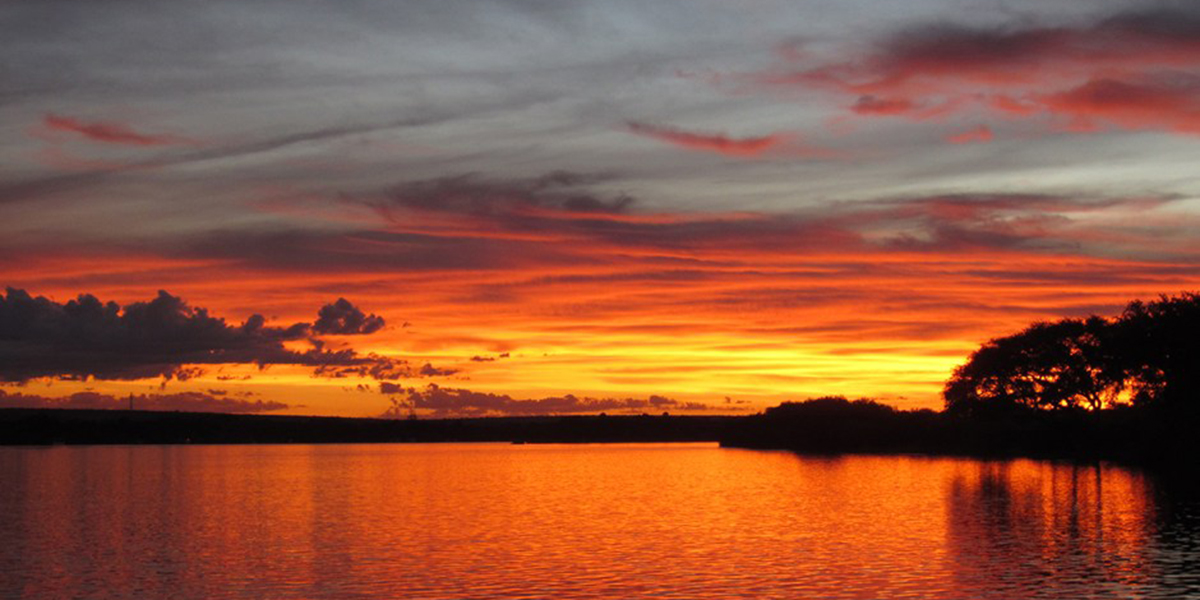 Sunset Cruise – This afternoon (after settling in a bit), you will be collected from the hotel lobby and driven to the Zambezi River above the Victoria Falls for a sunset cruise. You will enjoy cruising the placid, upper Zambezi River, and celebrate the setting African sun setting on the river. Share in the end-of-day ritual which sees wild herds streaming to the river banks for their last drink. Flocks of birds skim the waterline as the sun sets behind the African skyline. Bring a camera and create your own golden memories as you look for wildlife. You may have the opportunity to see a variety of game; including hippo, crocodile, and elephant swimming across the Zambezi. While aboard the lovely Zambezi Reflections, you will also enjoy a delicious gourmet dinner. 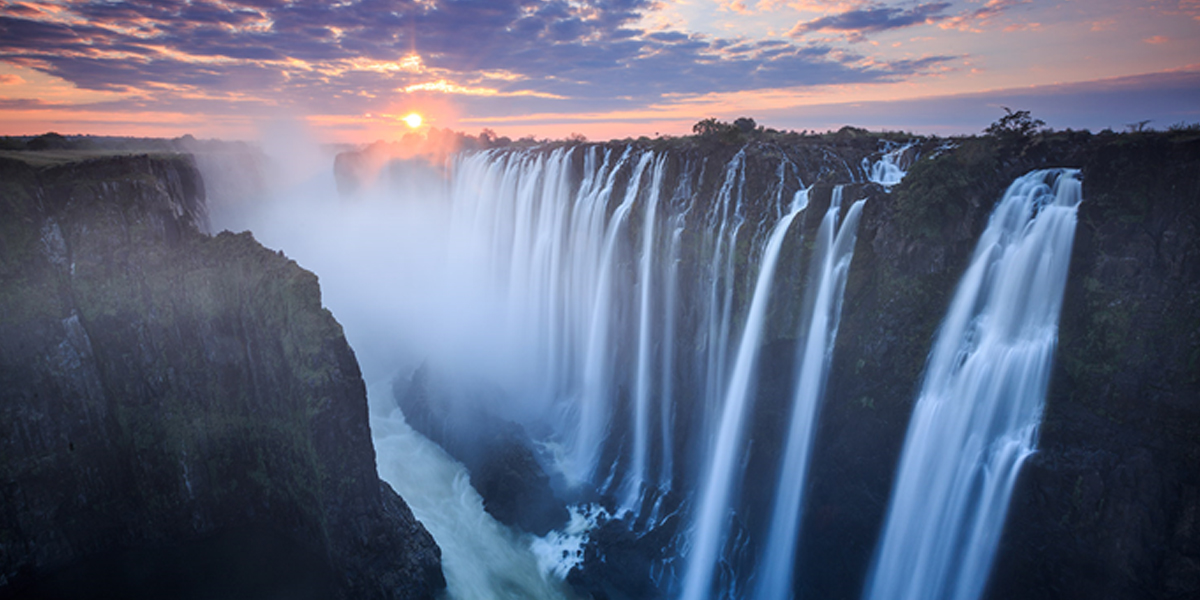 Tour of Victoria Falls – This morning, you will take a trip to the Victoria Falls and enjoy a fascinating tour. When David Livingstone first saw the falls in 1865 he was in the company of 2 local tribesmen who showed him this Mighty Wonder of World. This site today is a world heritage site with the largest single curtain of falling water on the planet, also known as “The Smoke that Thunders.” 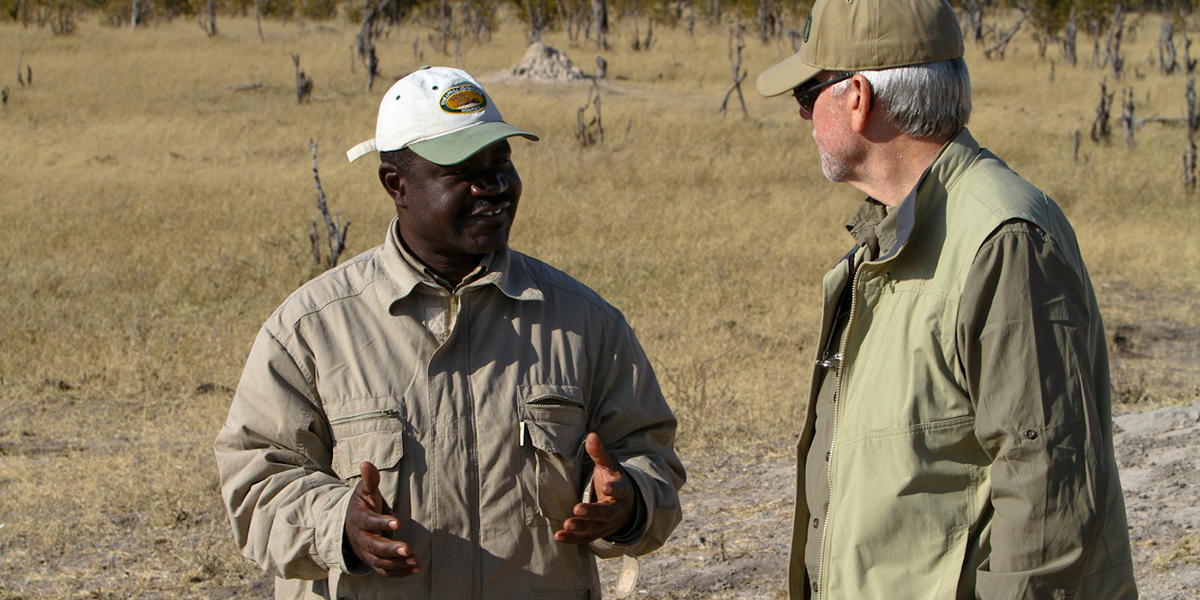 VFAPU’s work has been recognized by the Zimbabwe Council for Tourism as the four-time recipient of the ‘Green Globe 21 Award’ for Conservation Efforts in Zimbabwe. Charles Brightman has been personally recognized as a finalist in the Safari Awards category for ‘Best Personal Contribution to Wildlife Conservation’.

After breakfast, we will be collected and transferred to Chamabonda National Park with the Bhejane Trust guides and researchers. We will enjoy an informative morning excursion through the park learning about what the program does. 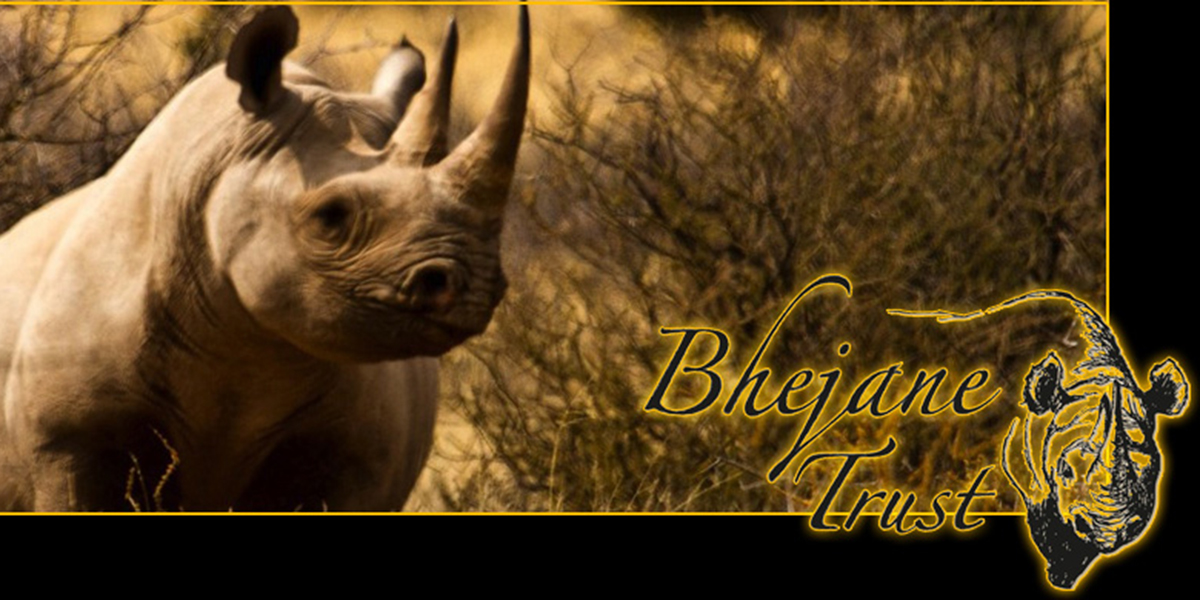 Bhejane Trust (‘Bhejane’ is the local Ndebele name for Black Rhino) is a non-profit trust, established in 2010 by two Zimbabwean conservationists, Trevor Lane and Stephen Long, initially with the idea of monitoring the Black Rhino population in the Sinamatella area of Hwange National Park in conjunction with the National Parks and Wildlife Authority of Zimbabwe.

The operations of the Trust extend from Hwange National Park to the Zambezi National Park, close to the renowned Victoria Falls, where Trevor has been instrumental in reviving the Chamabonda Vlei section, resuscitating old boreholes, drilling new ones, installing solar pumping units and getting pans revitalized after over ten years of not being pumped. He is also assisting the Parks on road development, fire management, anti-poaching, monitoring game populations, and other facets of restoring this park to its former status.

Much of Bhejane Trust funding comes from a volunteer, or Field Assistance, programs, which makes it possible for conservationists and wildlife enthusiasts to join up with the Bhejane team, and enjoy this rare and exciting opportunity to experience the real Africa of vast, remote places, and to actively assist in the conservation and survival of the magnificent wild animals which inhabit this wilderness.

Today, we will transfer by road to the main gate of Hwange National Park, a 2-hour ride in a small bus, on a private basis.

Once you get off the main Victoria Falls to Bulawayo Road, we will make a stop at Painted Dog Conservation Project, also known as African Wild Dogs. This is an informative visit, with a voluntary donation per person toward the research and upkeep of the facility. 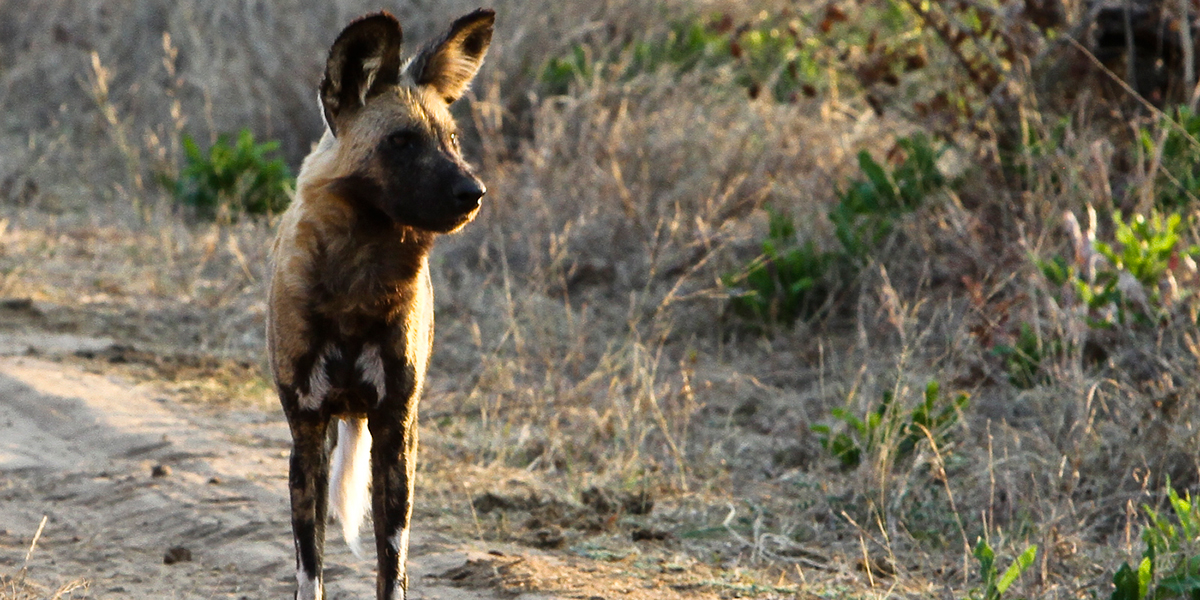 Painted Dog Conservation was originally established as Painted Dog Research in 1992. At this time, the human-induced carnage from snares, shooting, and road kills accounted for 95% of all dog mortalities in Zimbabwe. During the subsequent years, a strategy evolved establishing a combination of direct action policies and long-term education and community development programs. Driven by the desire to make a substantial, lasting contribution to painted dogs, nature conservation, and importantly to the lives of the local people, the project now employs some 45 staff in its various programs.

The Painted Dog Conservation was founded in 1992 by Dr. Greg Rasmussen, for the protection of the painted dogs and their habitat. Painted Dog Conservation works to engage and incorporate local communities in protecting painted dogs in Zimbabwe. The painted dog, or African wild dog, was once common in Africa with estimates of over half a million spread among 39 countries. Current estimates put their numbers at about 3,000. Since PDC’s creation, Zimbabwe’s wild dog population has increased from 400 to 700 individuals.

Daily anti-poaching patrols provide direct protection for the dogs, while at the same time making a significant contribution to conservation. The PDC Rehabilitation Facility allows PDC to deal with any eventuality concerning injured or orphaned individual dogs or the translocation of entire packs from problem areas.

After our Tour of the Painted Dog Facility, we will be met by our guide and transferred by game drive vehicles to Hwange National Park. 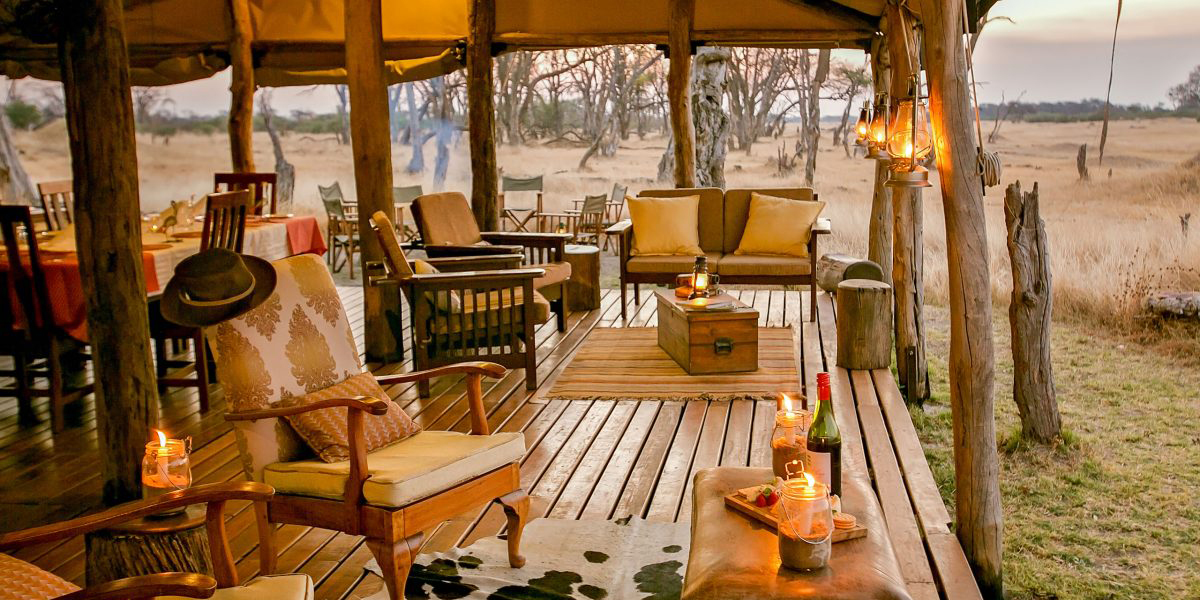 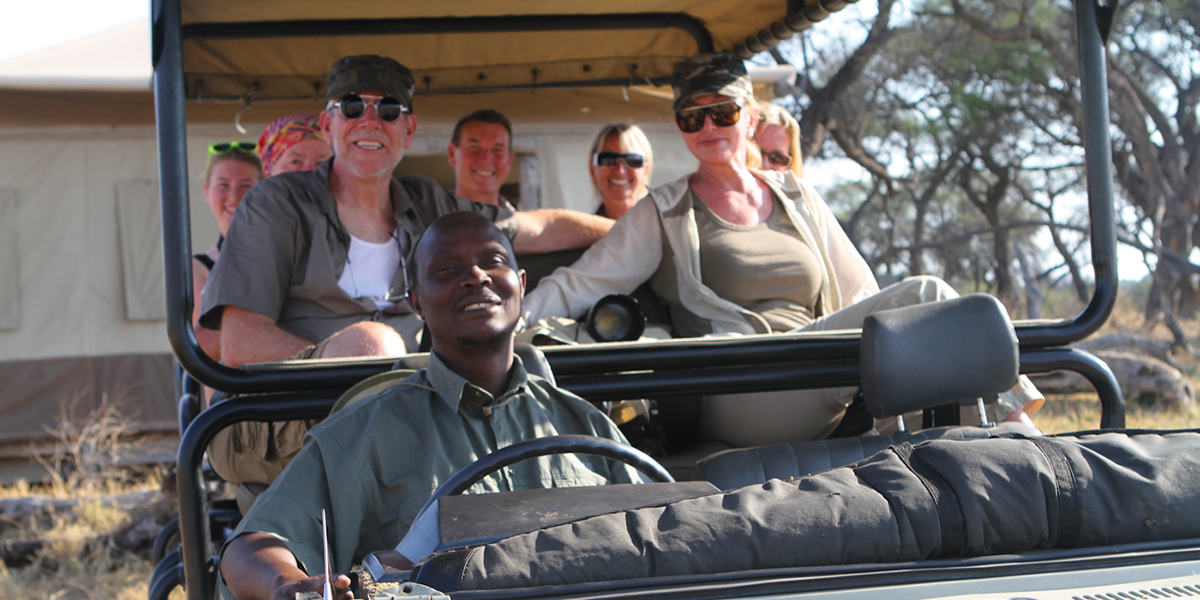 Hwange is a vast playground worth exploring so you don’t have to worry about being bored. Early morning walks are there for the thrill of encountering wildlife on its own terms and exploring the little surprises of the bush. 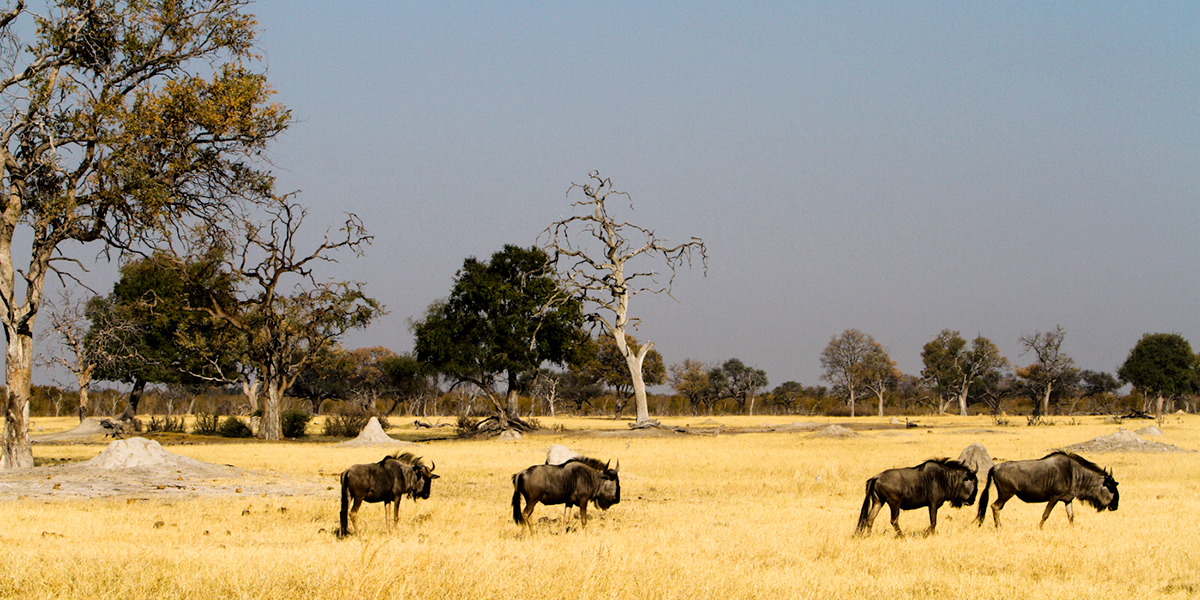 The rest of the day can be spent further afield on game drives in search of predators and prey alike. We like to do things properly so sundowners are an important part of the experience. Enjoy the natural beauty with a cold drink in hand.

As a general rule, we go out-and-about at the same time as the animals – usually mornings and late afternoons or evenings. However, the scope and scale of Hwange’s wildlife are such that there is generally always something to see. We don’t limit the number of activities you can do, so if you can’t sit still, you could do an early morning walk followed by a morning drive after breakfast. In the afternoon you could head out again, stopping off for a sundowner and a night drive back to camp. 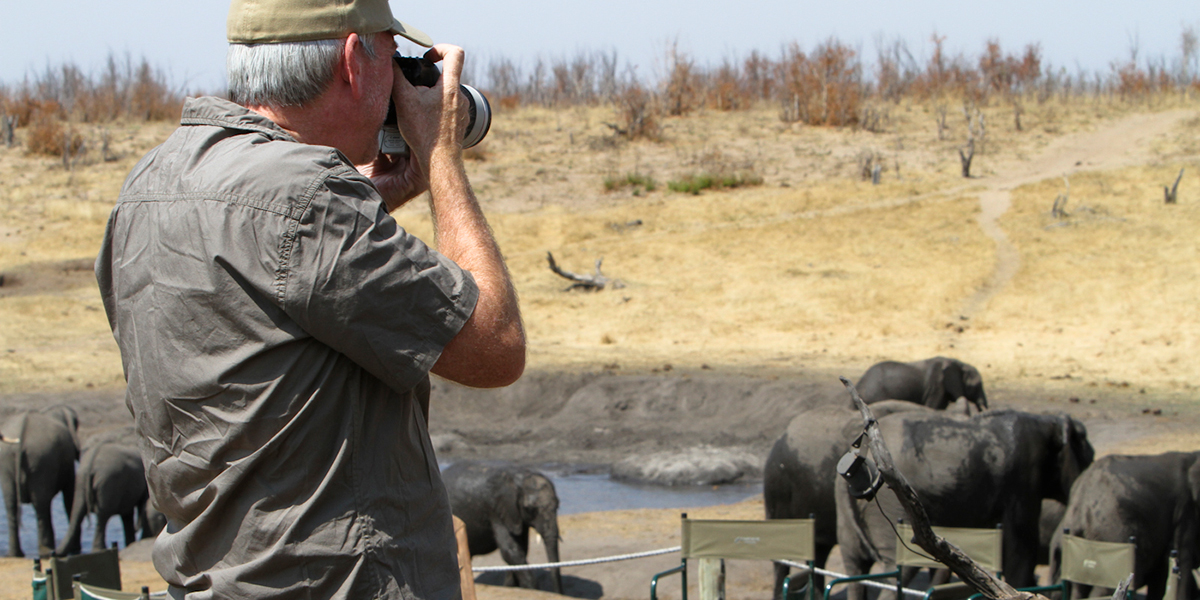 Be sure to venture out after dinner to see if you can find anything out on the prowl. The waterhole is particularly special, being the only source of permanent water for a good-sized area. So even if you don’t feel like venturing out, you will still be able to enjoy the daily visitors to the camp, which often include elephant, giraffe, zebra, impala, waterbuck, and kudu. Lion come in from time to time and wild dog have even made kills in full view of the camp. 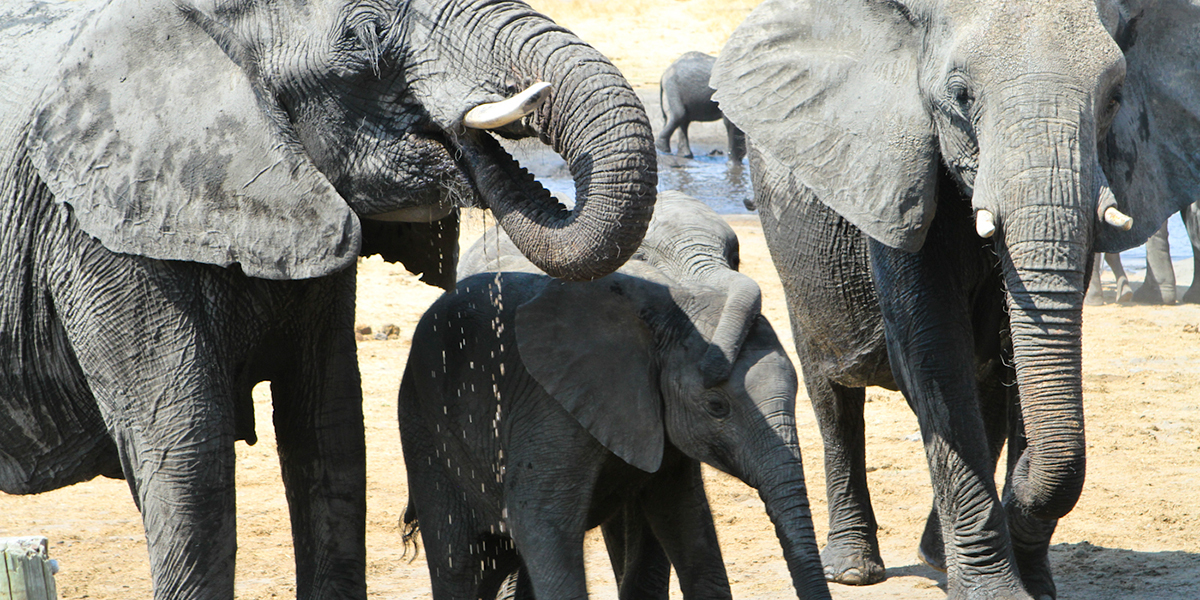 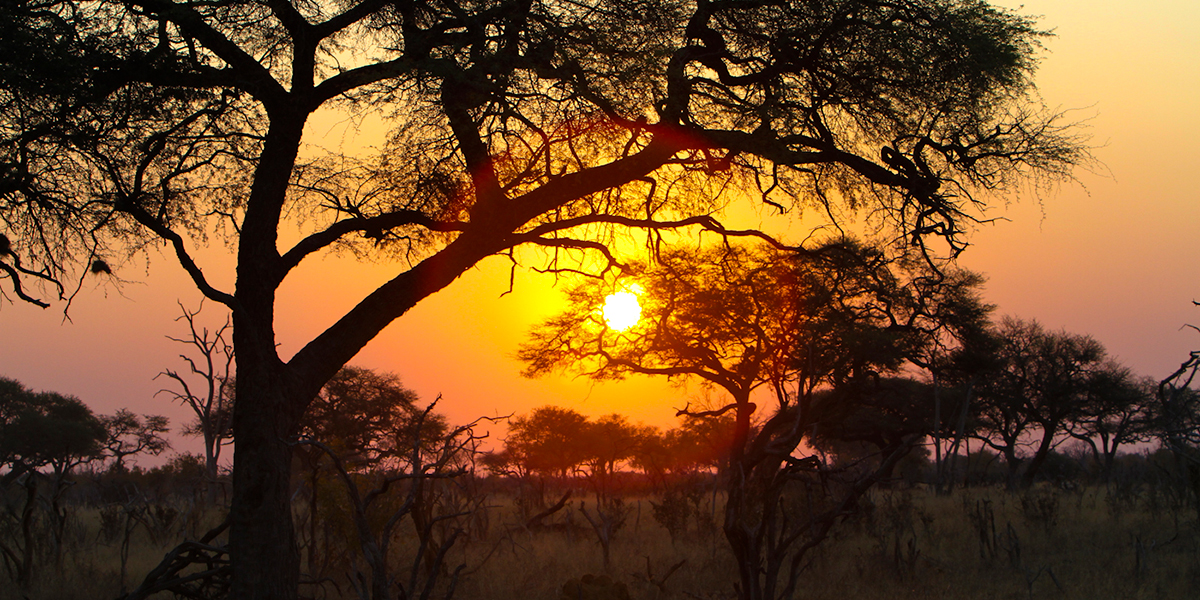 Morning and Afternoon Game Drives. During free time, we have arranged for you to visit The Community Trust. This will be a moving experience for the whole family.

The Community Trust is a non-profit organization, committed to conservation and sustainable community development. This Trust is partnered with a local community that surrounds Hwange National Park. The aim is for the relief of poverty, the promotion of education, as well as the benefits of conservation. Our support for these communities will be through capacity building, community outreach programs, and commercial tourism. The lodge itself stimulates the local economy by employing staff from the surrounding communities as well as developing skills. The trust will help tackle the root causes of poverty and environmental devastation. Meaning that the local economy can develop further, with poverty falling and environmental pressures decreasing, resulting in more optimism in the region. Donations will ensure the establishments and the long-term continuation of empowering these people and their children. We aim to establish sustainable programs of education, income generation, and conservation awareness. Together we can work to help uplift these people and their quality of life. 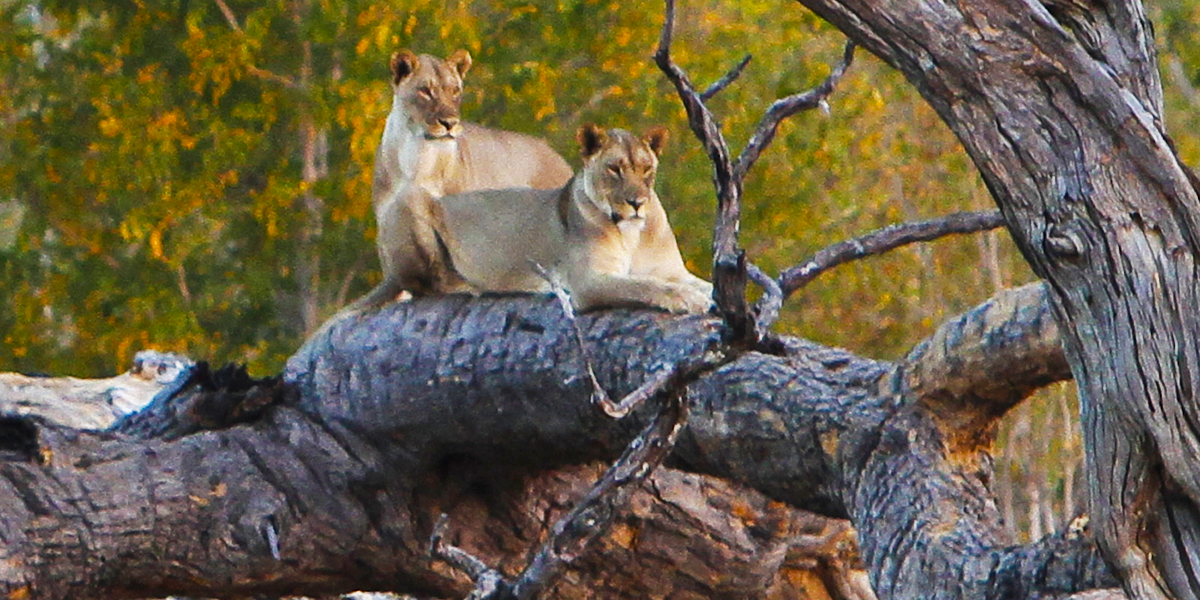 Morning Game Drive and breakfast. Mid-morning, we will hear an inspiring talk by the Hwange National Park’s Conservation Manager, on the Hwange Management Plan, The Water in the Park, Friends of Hwange and other conservation projects on the go.

Conservation & Wildlife Fund spend their time working in two areas: firstly, helping to ensure they will be operating in an environmentally sustainable way and secondly, getting staff and guests alike to understand a lot more about conservation issues in and around the places they operate. 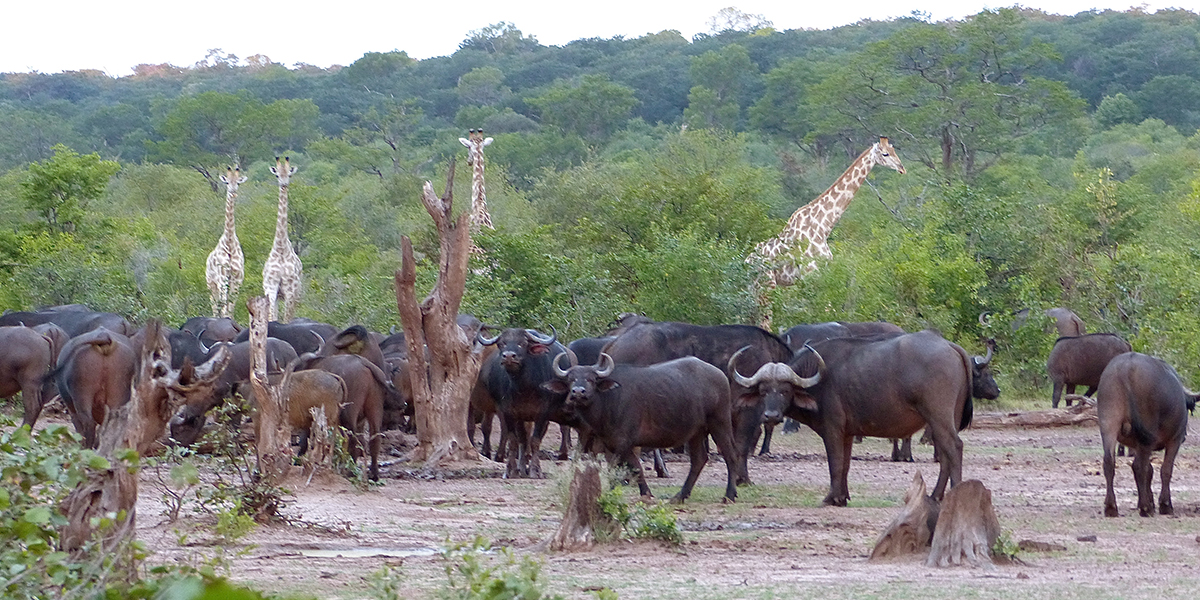 The day will come to a beautiful close with an afternoon game drive, sunset drinks and snacks as a group at a waterhole, followed by dinner in camp.

Sadly, it is time to leave Hwange National Park. You are flown by shared charter back to Victoria Falls Airport. 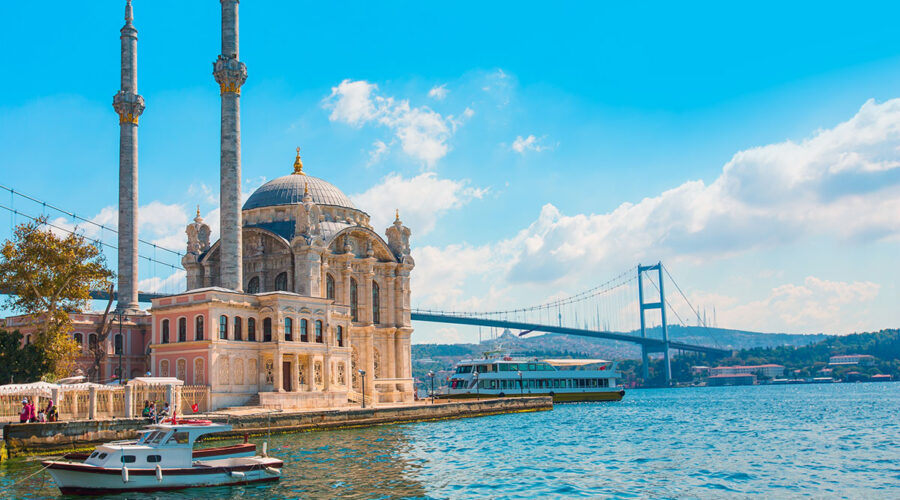 Discover the History of Turkey 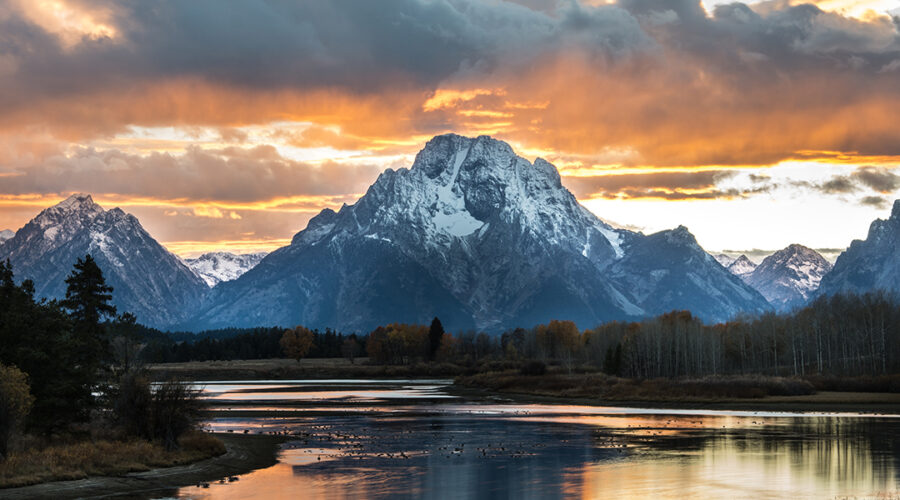